Skip to content
Home > About > Our Team > Global Advisory Panel

Consistent with the slogan, “nothing about us without us”, the Fund’s grantmaking is guided by activists from the disability community 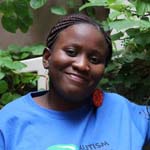 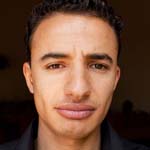 Fedi Behri is an advocate for the rights of youth with disabilities in Tunisia and across Africa.  He has been actively involved in the inclusion of disability rights in the new Tunisian Constitution.  He received training from both the International Disability Alliance and Handicap International on the CRPD, and served as a trainer in Tunisian Sign Language for Handicap International.  He has also been active in the dissemination of information about HIV/AIDS in sign language and has been active in both North and sub-Saharan Africa in promotion of and information production about the CRPD, with special emphasis on young Deaf people and increasing advocacy skills amongst the new generations.  He is a member of the African Youth with Disabilities Network, an African-wide network of youth with disabilities focused on advocating for rights at continental levels.  In 2012, he founded the Organisation Tunisienne de défense des droits des personnes handicapées, where he is the current Vice President. 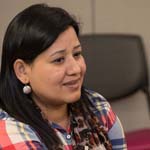 Pratima Gurung is an indigenous woman with disability, who has been an activist on the rights of Indigenous Peoples and women with disabilities in Nepal and Asia since 2008. She is currently serving as Secretary General of the Nepal Indigenous Disabled Association (NIDA) and president of the National Indigenous Disabled Women Association Nepal (NIDWAN) based in Kathmandu. She is also a Steering Committee member of the Indigenous Persons with Disabilities Global Network (funded by the Disability Rights Advocacy Fund). Previous to this position, she was a fellow in Geneva under the International Disability Alliance (IDA) and worked with several Nepalese organizations and the Nepalese government as a researcher and advisor on gender, disability and ethnicity issues. Pratima has a Masters in philosophy and teaches in the oldest college providing education to girls in Nepal. 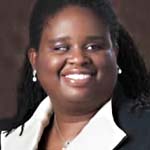 Senator Kerryann Ifill, who was nominated to the Disability Rights Fund Global Advisory Panel by the World Blind Union, was appointed in 2008 to serve as a member of the Upper Chamber of the Parliament of Barbados and served until 2012 as Deputy President of the Senate.  In 2013, she was elected as the first female President of the Senate of Barbados.  She also holds the distinction of being the youngest and first person with a disability to hold such an illustrious office.  She was elected as President of the Barbados Council for the Disabled in August of 2011 and is also the current President of the Caribbean Council for the Blind. In June 2010, Senator Ifill took up a new post with the National Disabilities Unit as consultant/facilitator for the Assistive Technology Services for the Blind and visually impaired.  In 2013, she had the honor of representing Barbados at the Conference of States Parties on the Convention of the Rights of Persons with Disabilities and delivered the official statement on behalf of Barbados.  Senator Ifill obtained a Masters of Business Administration in 2006 from Durham Business School. 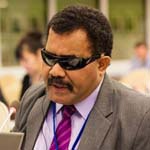 Setareki S. Macanawai is currently the CEO for the Pacific Disability Forum (PDF) based in Suva, Fiji. Prior to PDF, he served as the Executive Director of the Fiji National Council for Disabled Persons and Principal of the Fiji School for the Blind. Setareki is a leading disability advocate in Asia and the Pacific region, and has served on the committees of many international and regional organizations concerned with disability, including as Chairperson of the Steering Committee of the Global Network of Indigenous Persons with Disabilities, and as founding member of the Disability Inclusive Development Reference Group of the Australian Aid Programme. In the latter role, he provided guidance on disability-inclusive development to help shape the implementation of Australia’s Development for All strategy to ensure that the aid program is consistent with and fulfills Australia’s obligations under international law (CRPD). Seta earned a Masters Degree in Educational Administration from the University of New England of Australia. 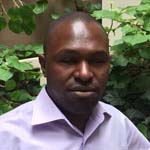 Edwin Sangara Osundwa has worked at Sense International, an international NGO which supports deafblind people worldwide, as the Country Representative for Kenya for the past 5 years.  In this position, Edwin has been at the forefront in advocating for the rights of deafblind people and people with other disabilities. Recently, Edwin presented at the UK Parliament where he gave oral evidence to the Parliamentary Select Committee inquiring into the work of the UK’s Department for International Development in terms of disability-inclusive development.  Edwin holds a bachelors degree in Special Education from Kenyatta University, a diploma in the management of non-governmental organizations, and a Masters Degree in Development Studies from St. Paul’s University. 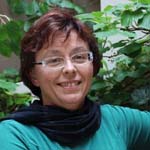 Sanja Tarczay was born in Zagreb, as a deaf child in a deaf family and later became DeafBlind. In 1994, she established the Croatian Association of Deafblind Persons – Dodir –where she currently serves as President.  She is the creator of a Croatian Sign Language course, courses for Service Support Providers (SSPs),  courses for Deafblind interpreters and the founder of the Croatian Sign Language Interpreting Centre. Since 2008, Sanja has been the practicum leader for a module on Deafblindness at the Faculty of Education and Rehabilitation Sciences, University of Zagreb, and a lecturer on Sign Language at the University of Applied Health Studies in Zagreb. She has also lectured at numerous other universities at home and abroad as a guest lecturer. She has published several expert and research papers, both as a sole contributor and as co-author and has participated in 40 conferences at home and abroad. In 2013, she was elected President of the European Deafblind Union.  Sanja earned her Doctorate degree in 2014; her thesis was titled, ”Meeting Challenges – Deafblind Interpreting From a User’s Perspective.“  She is fluent in five Sign Languages including: Croatian Sign Language, British Sign Language (BSL), International Sign Language (ISL), Swedish Sign Language and American Sign Language. She received the “Award for the Promotion of Rights of the Child” in 2016  from the Croatian Ministry of Demography, Family, Youth and Social Welfare for  “outstanding achievement in protecting the welfare, rights and interests of children.” 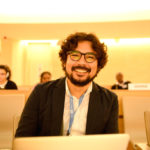 Alberto Vásquez is President of the Peruvian NGO, Society & Disability (SODIS) and a member of the Technical Resource Group of the World Network of Users and Survivors of Psychiatry (WNUSP). Alberto graduated in Law from the Pontifical Catholic University of Peru and holds an LL.M in International and Comparative Disability Law and Policy from the National University of Ireland, Galway. He has worked at the Peruvian Ombudsman Office and at the Congress of the Republic of Peru on disability-related issues. He has also worked as a consultant to a number of UN agencies including ILO, OHCHR and with the Special Rapporteur on the Rights of Persons with Disabilities. 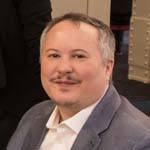 Dan Christian Ghattas is an intersex activist and Co-Chair of Organisation Intersex International Europe (OII Europe), which was founded in 2012 on human rights day as the umbrella organization for European human rights-based intersex organizations. OII Europe works for the protection and full implementation of the human rights of intersex people in Europe and worldwide on the basis of the Statement of the 3rd International Intersex Forum (Declaration of Malta). Dan Christian Ghattas started advocating for intersex human rights in Europe and internationally in 2009, and has since provided expertise to the Parliament of the European Union, the Commissioner for Human Rights of the Council of Europe, the UN OHCHR, the UN CRPD Committee, and the Maltese government. He was one of the initiators of the 1st International Intersex Forum (2011) and, in 2013, compiled the first empirical (pre-)study on the life situations of intersex individuals worldwide, covering 12 countries and most continents. In 2016, he wrote the ILGA-Europe/ OII Europe Intersex Toolkit Standing up for intersex human rights – How can you help?.  Since 2015 he has been the European Advisor for the Astraea Intersex Human Rights Fund. Dan Christian Ghattas holds a PhD in medieval culture. 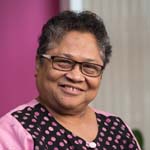 Myrna Cunningham Kain is an Indigenous Miskita woman from Nicaragua who has become a prominent advocate for the Indigenous Peoples movement. She left her community to study medicine at the Universidad Nacional Autonoma de Nicaragua, becoming the first female Miskita doctor. She began work in the Ministry of Public Health; then as governor, she played an important role in the consultation process on the autonomy of the multi-ethnic region and the negotiation of peace agreements leading to the approved Law of Autonomy of the Indigenous Peoples and Ethnic Communities from the Atlantic Coast of Nicaragua (1987) and the establishment of the first autonomous regional governments. She was the founding director of the University of the Autonomous Regions of Nicaragua’s Caribbean Coast and has also served as the coordinator of the Intercultural Indigenous Council. She is President of the Center for Autonomy and Development of Indigenous Peoples. In 2010, Myrna was awarded an Honorary Doctorate by the National Autonomous University of Mexico, becoming the first Indigenous woman to receive such recognition from UNAM. Dr. Myrna Cunningham was Chair of the UN Permanent Forum on Indigenous Issues during the period 2011-2013. She has also served in leadership capacities in several philanthropic and women’s organizations. 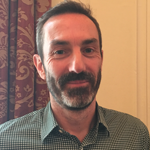 Ignacio Saiz is Executive Director of the Center for Economic and Social Rights (CESR), an international NGO based in New York which works to promote human rights in the economic, social and development sphere. Before joining CESR in 2006, he was Director of Policy at the International Secretariat of Amnesty International, where he developed Amnesty´s first program of work on economic, social and cultural rights. Prior to this, he served as Deputy Director of Amnesty International´s Americas Program, with responsibility for the organization´s human rights strategies in Mexico and Central America. Ignacio has also worked as an independent consultant for several other international human rights organizations in areas ranging from the prevention of torture and post-conflict accountability to sexuality and human rights. He has served in a bridge-building role on the CRPD Support Committee coordinated by the Spanish Committee of Representatives of Persons with Disabilities. Ignacio holds an LLM in international human rights law with distinction from the University of Essex.