Women with disabilities are one in five women in the world. As such, their perspectives are invaluable to conversations related to the advancement of gender equality and women’s rights.

The Beijing Declaration and Platform for Action, adopted by 189 countries, is a comprehensive and transformative global agenda for the achievement of gender equality and the empowerment of women and girls, including those with disabilities. In 2020, it turned 25. To celebrate its anniversary and expand commitments made by states, the private sector, and civil society to advance gender equality, UN Women co-hosted Generation Equality Forums (GEF) with the governments of France and Mexico in 2021.

But, where were women with disabilities?

While feminists with disabilities and organizations of persons with disabilities (OPDs) were prepared to engage in the Forum, present their ideas and be included in the agenda, the process was confusing. OPDs had a limited understanding of the Forum’s process. GEF organizers had spent little effort on involving feminists with disabilities. Women-led OPDs were not included in the bodies governing the process and accessibility was tough. OPDs reported that if they were invited to events, it was at the last minute and without any opportunity for preparation, thus creating a power imbalance that prevented their effective participation.

This is where Women Enabled International (WEI) came in. WEI is an organization founded by human rights lawyer and feminist, Stephanie Ortoleva, to advance human rights at the intersection of disability and gender worldwide. They became concerned with the lack of an intersectional disability and gender perspective and the lack of participation of feminists with disabilities — including women, girls, and marginalized genders with disabilities — in the GEF process.

“Important issues identified by GEF — gender-based violence, economic justice and rights, bodily autonomy and sexual and reproductive health and rights, feminist action for climate justice, technology and innovation for gender equality, and feminist movements and leadership — disproportionately impact feminists with disabilities. Including a disability perspective in the Forums was crucial.” – Amanda McRae, Director of UN Advocacy at WEI.

WEI’s solution was to start the Inclusive Generation Equality Collective (IGEC), a network of feminists with disabilities and OPDs, with the goal of advocating for the inclusion of women and marginalized genders with disabilities in spaces and debates focused on advancing gender equality. Disability Rights Fund’s Strategic Partnership Grant program, which supports organizations to expand advocacy in regional and global spaces at the intersection of rights, was the perfect fit for this effort. DRF funded WEI through a strategic partnership grant to expand this Collective and take meaningful action to influence participation and accessibility in the GEF for feminists with disabilities.

IGEC was established with a horizontal decision-making process to welcome inputs from all members and organizations involved, and create a safe space for feminists with disabilities to share their concerns and fears about the GEF. Additionally, the Collective conducted outreach for new members by organizing informational events. To increase participation from OPDs from Latin America, English-Spanish interpretation was provided during meetings. Advocates from Latin America also suggested creating a WhatsApp group for advocacy discussions, and this helped increase interaction and engagement in the region. Likewise, OPDs from Asia-Pacific asked the periodic meetings to be kept small and friendly, as that allowed emerging advocates from the region to share their experiences and input openly.

The Collective engaged both OPDs and broader feminist organizations together in dialogue for better understanding and to support advocacy for a disability inclusive and accessible GEF. This strategy contributed to the mobilization of both disability rights and feminist groups to advocate for accessibility in the Forum. Members of the IGEC developed an Advocacy Platform, open for endorsements, in which they stated how the six main issues focused on by the GEF impact feminists with disabilities and how outcomes could be inclusive. The Advocacy Platform has received 265 endorsements from organizations and individuals in 38 countries.

Funding from DRF has helped the Collective closely monitor the GEF. They have participated in various events and advocated for the inclusion of an intersectional perspective on gender and disability in the outcomes of the GEF process, in particular, the Acceleration Plan/Blueprint developed by the Action Coalitions (AC) in the GEF process. The ACs are multi-stakeholder partnerships to catalyze collective action to deliver concrete results in the GEF. The plan developed lays out priority actions, strategies and tactics to advance gender equality.

Even though the Forums are now over, IGEC’s work is not done. The commitments made during the GEF will last for at least five years, and the IGEC will be following this process closely to ensure the meaningful participation of feminists with disabilities in advancing gender equality. 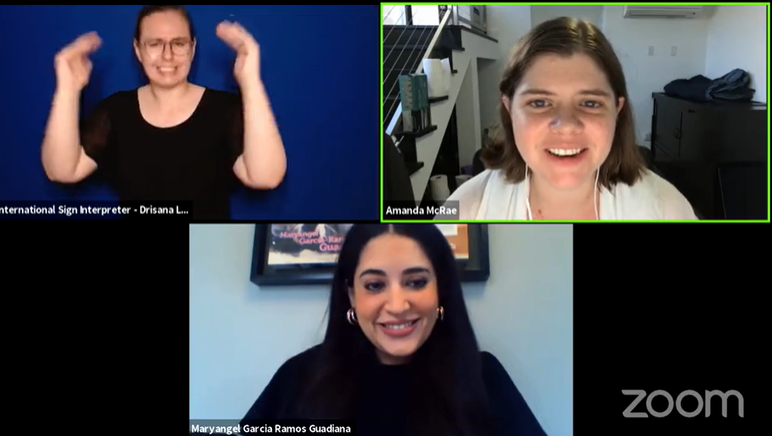