Skip to content
Home > Blog > My Voice Through the Rubble

Since the 2010 earthquake I have written a couple of times on January 12, the anniversary of the earthquake. This year, I hope to convey a different message. not because I will be talking about the same people I loved and those I did not know, who are no longer with us, but because I am still asking myself the same questions: What happened since? What has been done for my people not to live this nightmare again? What have we done to accommodate those who were impacted? What lessons have we learned, not in theory but how do we make use of them to value and save lives?

First and foremost, I am an earthquake survivor and this, comes with responsibilities. Responsibilities to appreciate life and cherish each and every single moment; to spread love the more you can; to see opportunities for solutions instead of focusing on problems; to stand up for the rights of the left behind instead of being self-centered and complaining about what doesn’t really matter or fighting the wrong fight; to forgive those who hurt you and of course not only to move forward but to move forward and stronger.

Sitting in my backyard tonight, and listening to the late concerto offered by crickets and lizards, I close my eyes and go back to that day. I was on the third floor of a building. I had just finished a yearly report and concluded a conversation with a colleague noting that in 2009 there had been no major disasters. A minute later this noise… these explosions… the screams… the dust… the tears… the black out.

I will start with my own quote “The earthquake devastated Haiti, but it also provided a chance for the country to be reborn… Today I weep for my aunt Gagaye, my grandmother Nini, my Dad who is a late victim of Goudougoudou (this is how we Haitians call the earthquake because of the horrible and deadly sound of the ground), my dear nieces Coralie and Monica who had to leave the country because they were so traumatized and so many other family members and friends who I am missing, and for those I did not know and who left us too soon.

But today I also celebrate life. I celebrate the strength I see in the communities. I understand the wise person who said a country never dies. A country like Haiti will never die, we band again and again but we don’t break.”

Seven years on… so many things happened knowing we are not necessarily progressing as fast as we should.

Haiti ratified the Convention on the Rights of Persons with Disabilities in 2009 but it seems like the presence of persons with disabilities has been acknowledged for the first time, only after the earthquake.

January 12 was an opportunity for the Haitian society to realize that disability was part of our daily life but that society, including duty bearers, had simply decided to ignore it. A few months after Goudougoudou, the survivors who became disabled not only began to be seen but entered the spotlight. This has been done gradually following extensive psychosocial programs. I think that those who had always lived in the shadow with a disability learned from their peers and the earthquake and started to come out and to realize they also had the right to exist and to be seen. The movement became stronger.

Do Disaster Management plans take into account persons with disabilities not as passive recipients, but as actors? Is there an official, inclusive and accessible information platform to make sure the Deaf, DeafBlind, and Blind persons have access to information in the event of an emergency? How about people with psychosocial disabilities?

Will persons with disabilities remain the forever left behind? I am not only talking about existence of laws but also about implementation of laws.

In the meantime, States have adopted the Sustainable Development Goals and among them Goal 11 “Make cities inclusive, safe, resilient and sustainable.”

Who in Haiti is responsible for ensuring that commitment is being followed up? Who is accountable for this in my country? And what is done — actually and concretely? What are our specific and national targets for that goal? How come I am not aware of them?

I no longer want to read about change and progress as part of a vision, as a dream without seeing it happening in the communities. I want to say “I was there, I saw, I understood, we all contributed and we are in the right track, we are moving slowly but surely.”

Ayiti Cherie (Dear Haiti), seven years later, I still hear people screaming out their soul…but I also see our Nation. I see its children standing straight, beyond the proverbial resiliency and the capacity to endure the unbearable; I see Disability Rights Fund Grantees advocating for inclusive policies; I see the children of Haiti who have finally realized that we are one Nation and that we have a country to build together where each one of us feels important and home, a country where nobody is excluded based on disability.

January 12 2017, I remember what I said a few years ago and I do believe it stronger and stronger…My country will not die, the voice of the left behind will rise and be heard through the rubble and this year again like the other years, I am one with my people! 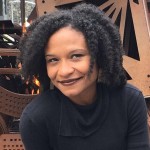 Jo-Ann Garnier Lafontant is the Haiti Grants Consultant for the Disability Rights Fund. She works with the program team and serves as a liaison with Disabled Persons Organizations in Haiti. DRF has been making grants in Haiti since 2013. Jo-Ann brings over a decade of experience supporting Haitian civil society to promote the rights of children, including children with disabilities, and to provide technical support to civil society and the government on rights and inclusion of marginalized groups.